Close
Back to Blog

Are you still looking for a smart place to relocate a warehouse or distribution center? In this second installment of our “Location, Location, Location” series we explore Chicago - the third largest city in the United States, and one of the 50 largest cities in the world.

Chicago has a long history as a transportation hub and has certainly come a long way from its’ early days as a fur trading center. In 1848 the opening of the Illinois and Michigan canal connected Chicago to markets on the US East coast and the city never looked back, quickly becoming the major North American transportation hub it is today. Here are some great reasons the Chicagoland area may be just right for your next warehouse or distribution facility.

As we mentioned in Part 1 of this series, the demand for warehouse space across the United States is high. Whether seeking new e-commerce fulfillment space, manufacturing facilities or leveraging the expertise of a third-party logistics provider, companies are on the move and that means warehouse relocation. In terms of warehouse space, the Chicago area performs well in two important categories.

The state of Illinois boasts over 2,185 miles of interstate, ranking it third largest in the nation in interstate highway miles. Five (5) of those interstates serve the Chicago area and connect it to nearly five (5) million potential customers in cities like Indianapolis, Nashville, Omaha and Kansas City. A well-developed highway infrastructure is key in getting your goods the final mile to their destination.

For more than a century, Chicago’s massive railroad network has served as the hub for freight being transported between the east and west coast of the United States. The state of Illinois is the only state that has all seven Class 1 freight railroads with over 500 freight trains moving through the area every day. According to the Chicago Metropolitan Agency for Planning (CMAP) “approximately one-quarter of all freight trains and one-half of all intermodal trains in the nation pass through Chicago, the continent’s main interchange point between western and eastern railroad.” An estimated 40 million tons are handled by Chicago rail annually.

Does your business rely heavily upon air freight? If so, you can leverage the strategic value of Chicago‘s two international airports which are served by over 50 airline carriers.

Strategically located along the southern shores of Lake Michigan, water transport helped put Chicago on the map as a transportation hub. Since the opening of the St. Lawrence Seaway in 1959, connecting the Great Lakes to the Atlantic Ocean, Chicago has been an important shipping port. Over 200 metric tons of bulk cargo move via the system each year including, iron ore, coal, limestone and grain.

The greater Chicago area is a mecca for higher learning institutions. Over 50 colleges and universities contribute to an employment-ready workforce. According to the 2016 Illinois Economic Report, “The Chicago 9-county region has the largest population share in the prime-age group 25 to 54, and a population with the highest educational attainment and the highest labor force participation rate.”. Thirty six percent of the population attained a Bachelor’s degree or higher, a rate that is 20 percent higher than the national average. According to Data USA there are nearly 78,000 people employed in the transportation and warehousing industry or roughly 6% of the employment market.

Put Yourself in Great Company

According to the annual Fortune 500 Report, more than 50 Fortune 500 companies call the region home – and for good reason. Discover what great companies like ConAgra Brands, Sears Holdings Corporation, McDonald’s Corporation and many more already know. Location, location, location, plus a talented work-ready labor force can be a winning combination for your company too.

Your business may be in e-commerce or brick and mortar retail distribution. You may serve the automotive sector or other industrial manufacturing. Whatever the industry, your supply chain will likely benefit from a strong warehouse network strategically located near a major population center. Chicago may be the right answer for your logistic problem.


If you would like to learn more about relocating your warehouse or distribution center?

Vantec Hitachi Transport is Helping Keep the Vibe Tribe Moving Closer to Adventure The economic effects of supply chain disruptions caused by COVID-19 continue to ripple through the ...

Your Guide to Importing PPE

Are you considering importing PPE or other Medical Equipment into the United States? The impact of COVID-19 has created an unprecedented global demand for medical equipment needed to ...

When is Air Freight the Right Choice?

In 1903, on a cold and windy December day the Wright brothers changed the world with a single 12-second flight. Considering how much work had gone into building an aircraft that could ...

Does Your Freight Forwarder Offer More Than Just a Good Price?

Just the facts? Download our complimentary infographic and learn more about our Chicago CFS bonded warehouse. 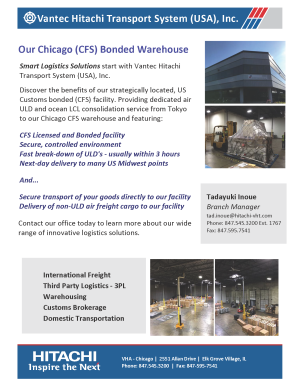 Vantec Hitachi Transport is Helping Keep the Vibe Tribe Moving Closer to Adventure The economic effects of supply chain disruptions caused by COVID-19 continue to ripple through the global economy. From automotive importers to agriculture exporters, few industries have been ...

Your Guide to Importing PPE

Are you considering importing PPE or other Medical Equipment into the United States? The impact of COVID-19 has created an unprecedented global demand for medical equipment needed to combat and treat the virus.The critical nature of PPE and other medical supplies has created a ...

When is Air Freight the Right Choice?

In 1903, on a cold and windy December day the Wright brothers changed the world with a single 12-second flight. Considering how much work had gone into building an aircraft that could achieve the basics of controlled flight, it is safe to say that cargo space wasn’t a top ...

Does Your Freight Forwarder Offer More Than Just a Good Price?